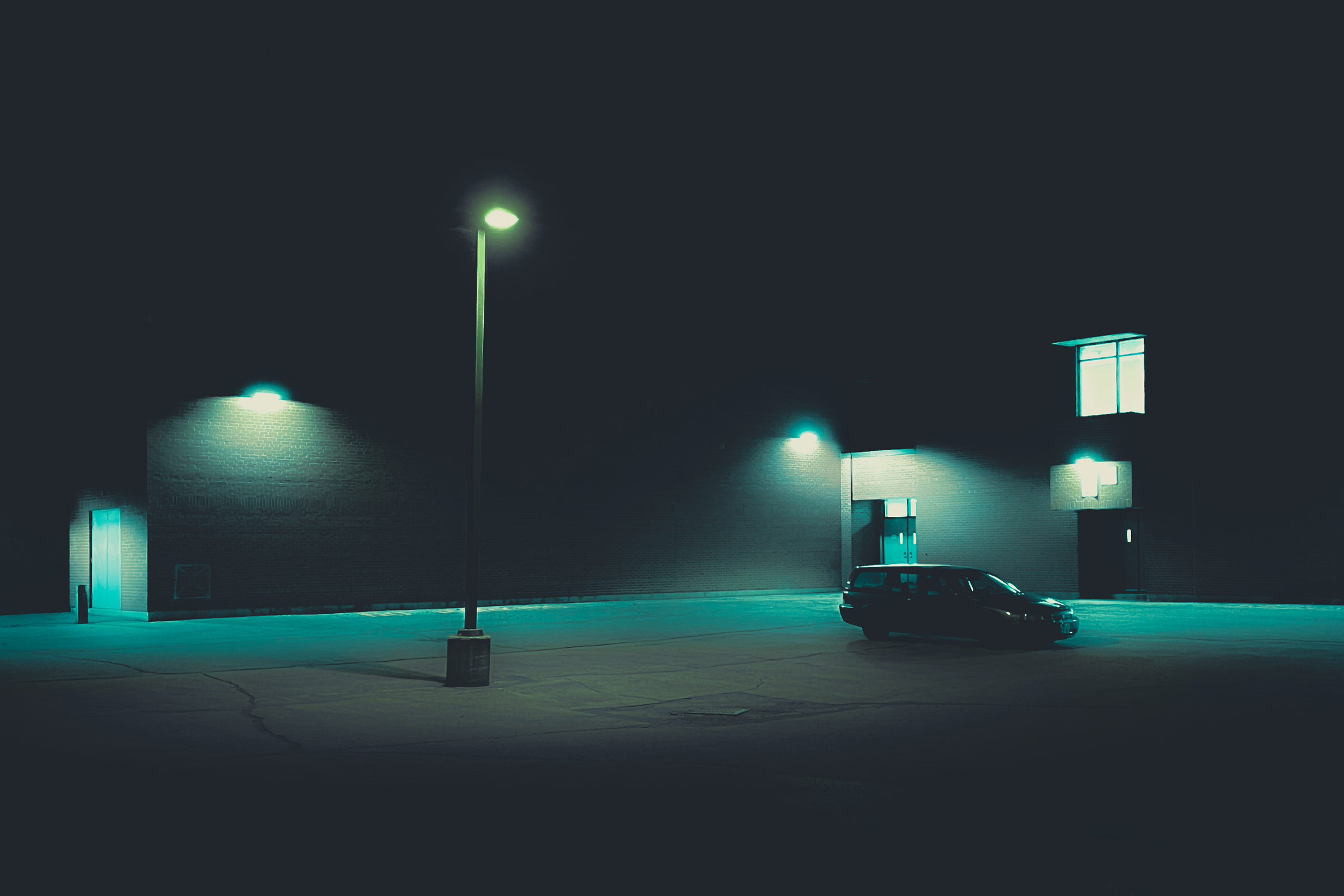 Philosophy graduate Peter Dobozy, has a dark and foreboding style that he applies to subjects from city streets to mountainous landscapes. His photography features fog, colorful light sources, hazy subjects and deep shadows - all shot on an iPhone.

I grew up on the West Coast in a small, isolated, town called Powell River. We're just up the coast from Vancouver but it's several hours of driving and two ferry rides away. It's a paradise for anyone who loves the outdoors, as I certainly do, but the small town aspect really wore on me growing up; all the more so looking back now. Craving adventure, I ended up going to The University of Toronto for my undergrad. With the exception of my time spent attaining my Master's in Philosophy, Toronto has otherwise been home since. But truth be told, my heart still aches for the Pacific Northwest (PNW). I'm fortunate enough to travel back west every year to get a modest fix, but it's never enough. Ideally, I'd find a way to better split my time between the two.

Both my father and uncle were hobbyists and while their influence never really rubbed off on me, whatever the biological impulse, I'm confident I shared with them. Photography started out for me, as I'm sure as it does for most, as a somewhat naive, idealistic way to capture "what is". Missing the PNW as much as I did made me want to capture it and take it with me. However, once Toronto more or less became my new home, I was forced to adapt and started shooting urban environments.

Any particular photo is usually inspired by a number of ideas and sensations running through me that I often prefer to leave it unexplained. Moreover, with respect to the arts, I think there's tremendous value in the unknown. Explanations often underwhelm and anyone's ability to create their own interpretation or bring about a new perspective is ultimately of more value. However, I do think I could trace much of it to nature and having grown up on the west coast. What I miss most about the PNW is the gloomy, violently stormy, day either by the sea or on a remote lake up in the mountains. This type of aesthetic experience resonates with me rather profoundly. Many would call it the sublime, but I'm inclined to believe that it's only a partial explanation at best. To some degree, it's this sensation that I'm often trying to recreate with my photographs. Beyond that, there is certainly a parallel experience that I often draw from music. My nature excursions are almost always accompanied by a carefully crafted playlist designed to compliment the landscape and weather. And similarly when I edit photos, I'll often find a piece of music that captures what I'm trying to convey and listen to it on repeat while I edit.

Dark, moody and atmospheric for the most part, but I certainly try not to limit myself. I am often trying to fill that void left by nature, so that's my guiding principle. But all we can do, especially since COVID, is shoot our environment, wherever you happen to find yourself. I've embraced that challenge, having lived in Toronto for as long as I have. If you were to go back through my instagram account, you'd see I was doing minimalism almost exclusively for a very long time. I also recently started editing nature pics again as a means to both stave off burnout and help reinvigorate my creativity.

The more I shot nature, the more I realized my favorite time of day was dusk, when everything begins to darken, grey skies become more pronounced, silhouettes emerge and the landscape becomes increasingly abstract. Similarly within an urban environment, the increasing ambiguity of objects as they fade into dark helps create a sense of wonder and awe; the more it leaves a scene open to interpretation the better.

Both. Part of the joy is the unexpected, somehow being in the right place at the right time and having the opportunity to capture it. Mobile photography has come such a long way as well, (especially for low light shooting) that I'm relieved to know my iphone is always ready to snap a pic. That being said, I do make a point of trying to mitigate some of the variables by going out at specific times of day, checking the weather forecast, revisiting a spot over and over again until that stupid parked car has finally moved, etc.

What camera equipment do you use?

Presently, it's iPhone 12 Pro and the Lightroom App. My instagram is iPhone-only as well. I have a Canon 7D, but I had a serious setback almost four years ago when I suffered a concussion. I was off photography for nearly a year and then it took about another year to refind my groove. I'm between 80/90 percent now, but the pace of my recovery has been glacial, requiring much in the way of physical and cognitive rest. Needless to say, the added steps of DSLR shooting and editing is still much too time and energy intensive for me to give it the required attention.

Camera Body
iPhone 12 Pro
Please note that some of these are Amazon affiliate links that help to support the running of this site.

Lots and lots of Lightroom. It's funny to think back when I first began to edit photos, I only allowed myself the most modest of tweaks, essentially just trying to correct for the limitations of my equipment. However, I've come to realize that the very act of taking a photo is a distortion or a manipulation of "what is," and you are just as much creating something as you are trying to capture it. At that point, I think you have to accept that everything is fair game, even the most egregious of manipulations, exaggerated colours, shadows, blur, etc. Any idealistic restrictions you might think to place on yourself will only hinder your perspective and ultimately, your creativity. Although, one could argue that some self imposed restrictions can also be used to the same benefit.

It pains and pleases me to go through my instagram and see the evolution of my work. It's also the reason I don't delete my posts. The years I spent producing minimalist work seemed like a way to simplify the process; it seemed an easier way to learn composition and to get a sense, spatially of where everything should be. I used to do a fair bit of black and white photography as well, but for some reason, it always felt a little too easy, almost like I was cheating. While I do lowlight, urban photography almost exclusively now, or at least that's what I share on instagram, I do take a lot of photos of every type everyday when I'm out on my daily walk. Again, only doing one type of photography I think will only serve to limit you. It's part of the reason I began editing nature photos again. I like how I've now come somewhat full circle, from nature to urban and back to nature, with the various styles always informing and influencing one another. I'm now in the midst of developing my own presets.

I only took one photography course, but had an incredible instructor who knew how to walk that delicate line between encouragement and critical feedback. He simply said, when starting out, just take lots and lots of pictures and don't waste a lot of time editing. Over time, your style will emerge. I would add that you should also spend a great deal of time looking at other people's work.

How has Covid-19 affected your photography?

We're all feeling trapped and restricted these days and I think that played a role in my return to editing nature photos, simply as a means of escape. Moreover, as much as I love Toronto, it's a difficult and often frustrating city to shoot. Over the past year we've had very little in the way of interesting weather, just lots of cloudless, sunny days, which is great for minimalism during the day, but it doesn't leave me much to work with at night. However, given my inability to travel and shoot another city or country, maybe it's time to take my own advice and revisit minimalism more regularly as well.

What are thoughts on Instagram as a photography platform?

There's too much to be said here. I remember when Instagram initially removed the public view of like counts and the significant drop in likes that followed. It really shook my confidence (not to mention the hit to my dopamine levels). On the one hand you shouldn't let it sway you, but it's also nice to see your work being well received. I'm very critical of my own work and often know when I've posted something mediocre, but other times it seems completely unjust. I was very frustrated for a while, but eventually decided to treat the issue as a direct challenge to better my craft. I don't like where I believe Instagram is heading, which is essentially another Youtube competitor. But let's be honest, the artistically motivated are the least profitable for the platform and they will become increasingly marginalized until someone develops something better and we all leave en masse.

I would say that I'm actually more frustrated with their compression algorithm which creates all sorts of artifacts in one's posted work (even worse when my work is reposted, no offence) so I've taken to doing multiple drafts and trying to find a compromise between the final product vs what I post to instagram.

The community on the other hand is outstanding. The people I've engaged with, the works that have inspired me, it's been rather incredible and one of the few wins for social media. I see the ills of social media all too painfully, but for the artistically minded who use it exclusively to that end, it's been an indispensable tool and I wouldn't be half the photographer I am today without it.

Beyond the various outdoor pursuits, I'm heavily into the arts, music, film, etc., play piano and probably spend way too much time in my own head philosophising about the many ills of the world. Everything we do, all of our experiences, good, bad, feeds our creativity whether we're conscious of it or not. Part of what I was saying before, that the very act of taking a photograph is a distortion, is due to our imprinting a fragment of ourselves onto every photo we take, whether it's a memory, idea, sensation, etc. they become these coded signposts, a sort of cryptic journal and in my case, intentionally left as unexplained as possible.

Thank you for taking the time to speak to us Peter. Any final comments?

Thank you for thinking so highly of my work and giving me this opportunity to back up my photos with a few words.