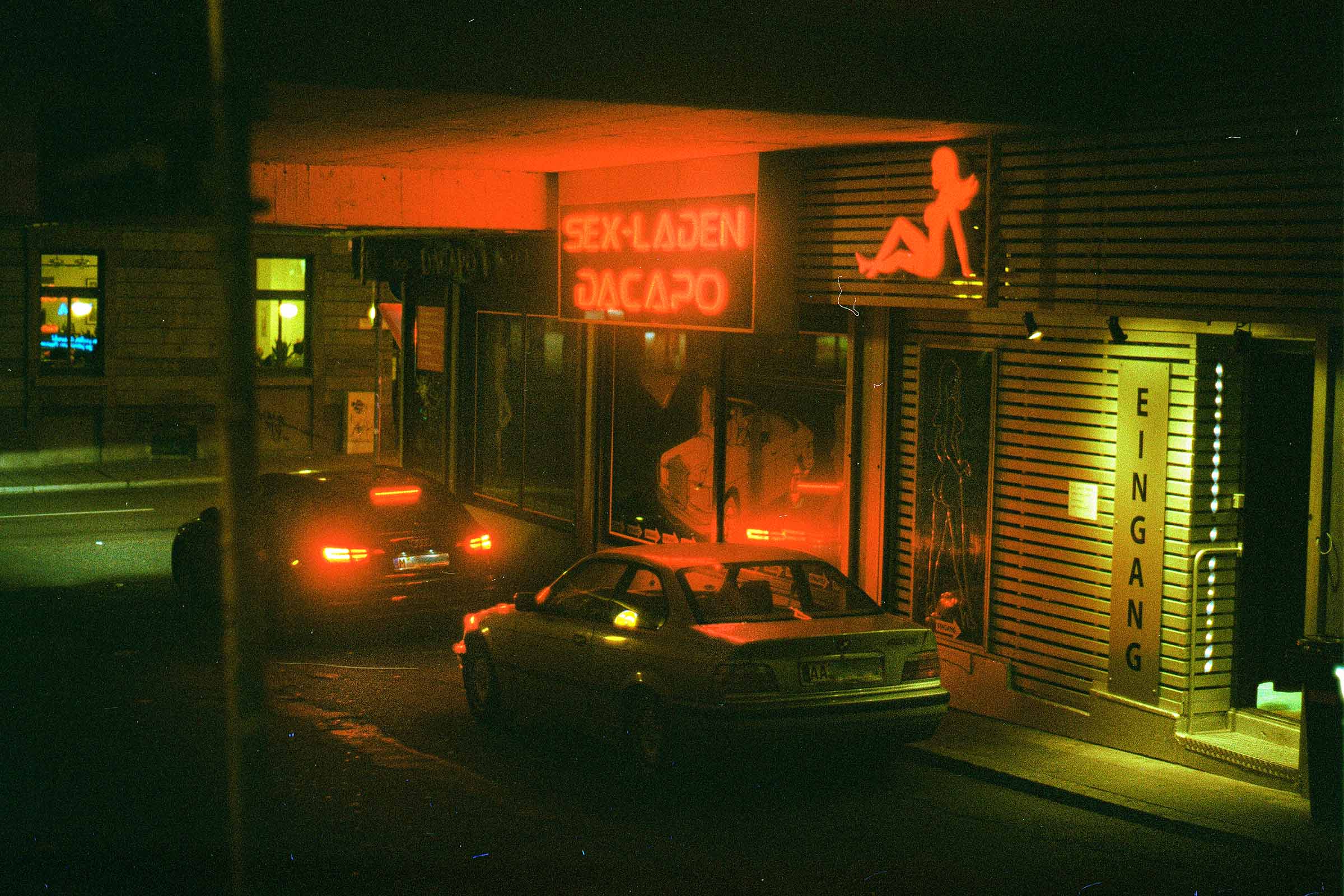 Shooting exclusively with 40+ year old cameras, Anders Beulich's photography almost inevitably harks back to a style of a bygone era. His usage of film that was designed to be used during the day, results in a golden-green colour cast, which when combined with red light sources, lends a warm ambience to the images.

Growing up as the first of five children in the rather provincial south of Germany, I soon found my passion for creative expression. I painted a lot as a child. This is how I handled the world around me and the emotions it triggered in me. For a long time I was a rather calm child until I started to push my limits anew as a teenager. I became politically active, started doing graffiti and even was the singer of a hardcore band. In this way I learned to work with my emotions in a creative process. For ten years, Graffiti and Street bombing in particular became my focus. I was fascinated by doing something just for myself, to have something like a second life and to feel the unique and dense atmosphere in the city at night. Photography only found its way into my life later. Even though I am close to nature, I am absolutely an urban person. Urbanity has also emerged itself in my professional path. Today I work full-time as a landscape architect and urban planner in Berlin.

If you actively write illegal graffiti for a long time, it is almost certain that you will eventually be caught. When that happened to me, I was suddenly forced to stop. Especially at the beginning it was like breaking an addiction and I really needed something to do as a substitute. It was important to me not to give up the nightlife and to do something creative in the process. That's how I first got into photography.

Being a student at the time, I couldn't afford a digital SLR camera, so I bought an analog one at a reasonable price. My first camera was a Minolta X-700, the films I shot were the cheapest to get. To this day, the low-priced Kodak Gold 200 films are my favorites.

Photography gave me what I found while writing at night. Surreal moments in the city, the atmosphere of the night and the feeling of being able to create something that lasts.

I would describe my style as dark and dirty, yet authentic and warm. In my photographs, I do not attach importance to depict reality one to one. What matters most to me is to capture the scene as I perceived it personally and subjectively. So I usually don't retouch the dust on the negatives in my scans. It belongs to the scene and creates an atmospheric element.

The visual and atmospheric depth of the city at night fascinates me. It's like the city is completely transformed in the night. The actors are exchanged, the lighting, the plot and the atmosphere change. Beyond the daylight, a magic arises that captivates me. My work therefore is almost exclusively focussed on photography at night and the blue or golden hour.

Where do you draw inspiration from? (Perhaps from movies, music, paintings etc?)

There are many things that inspire me. In general, I would say that the 80s and 90s are a huge influence on me. On the one hand, almost everything is produced analogue, on the other hand it's just the vibe that fascinates me. This ranges from photography and film to fashion and architecture. In particular, it is the photographs by artists like Nan Goldin or Jamel Shabazz that are a great inspiration for me. Also the documentary paris is burning about the queer scene in New York in the early 80s inspired me for the same reasons. It is the characteristics of the colors, outfits and personalities that fascinate me.

What are you looking for when you go out shooting? What catches your eye?

I would describe myself as an empathic person. My surroundings therefore have a strong impact on me. In the situations in which I take a picture, it is less about what I see and more about what I feel. There are different things that make me take a picture. That could be a special light, a special person or an impressive situation. I almost always have my camera with me so that I am able to capture a situation that is special for me at any time. Sometimes it happens in a split second and sometimes I wait an hour for the perfect moment to come.

How do you know when you've got "the shot"?

Since I only take analogue photos, I don't have the option to check a photo immediately after shooting. Usually I only take a single photo in each situation. It is not important to me that my photographs are perfect on a technical level. They have to touch me on an emotional and atmospheric level. Only then a picture will be selected.

Definitely an impulsive shooter. Often there is only one right moment. It is even more important for me to not miss this moment, for example by looking at the camera display (none of my cameras have a display).

The look of my photographs is related to the fact that with Kodak Gold 200 I am using a film that is not made for artificial light. The light on the film is therefore not exposed in the original color but with a green-yellow cast. This color cast gives the photographs their very own, warm and abstract coloring. Even though the situation is not shown in the original colors, it mostly is closer to the atmosphere I perceived in this particular moment.

From a technical point of view, I always operate the camera manually and rely on my intuition when making the adjustments. In most situations I choose an exposure time between 1/15s and 1/60s and an aperture between f1.4 and f2.8.

I think my style has developed continuously. For a while now I've noticed that my pictures are getting warmer in terms of characteristic and color. I think it has to do with me moving to the east of Berlin. The city has become a new home for me. The dirt and brutal honesty but also the joy of life and warmth of the people definitely have an impact on my photography.

Do you have one or two photos that are you particularly proud of? Can you tell us the story behind them?

This photo is a special one for me. I shot it in the Yuen Long district of Hong Kong in March 2019. What makes this picture special for me is that it is flawed from a technical point of view. The shutter of my minolta x - 700 did not work properly and the negative was only half exposed. It's the flaw that makes the picture unique.

This photo was taken at the beginning of the corona pandemic in March 2020. We had just moved to Berlin and there was an unusual silence in the city. On our way home we had the chance to witness a beautiful sunset. We drove past the city bathed in a golden light. One of many moments in which we realized that this is our new home. For me, the photo symbolizes a new beginning in a time full of uncertainty.

Try to do what feels right to you. Especially at the beginning it is difficult not to let yourself be guided by things that are currently hip and work. Otherwise the same images will be reproduced over and over again. Photography will only make you happy in the long term if you capture exactly the moods that mean something to you personally.

I would also advise you not to be tempted by gadgets. From my point of view, honest pictures with cheap equipment are at least as good and usually better than half-hearted pictures with professional equipment. It's about passion, not megapixels. In the end, what you feel should be the most important thing about photography.

Thank you for taking the time to speak to us Anders. Any final words?

Shop fronts, filmic vibes, and a whole lot of Cinebloom

12 months ago
© Copyright Fading Hours 2022. All images published on this site are copyrighted to their respective owners.