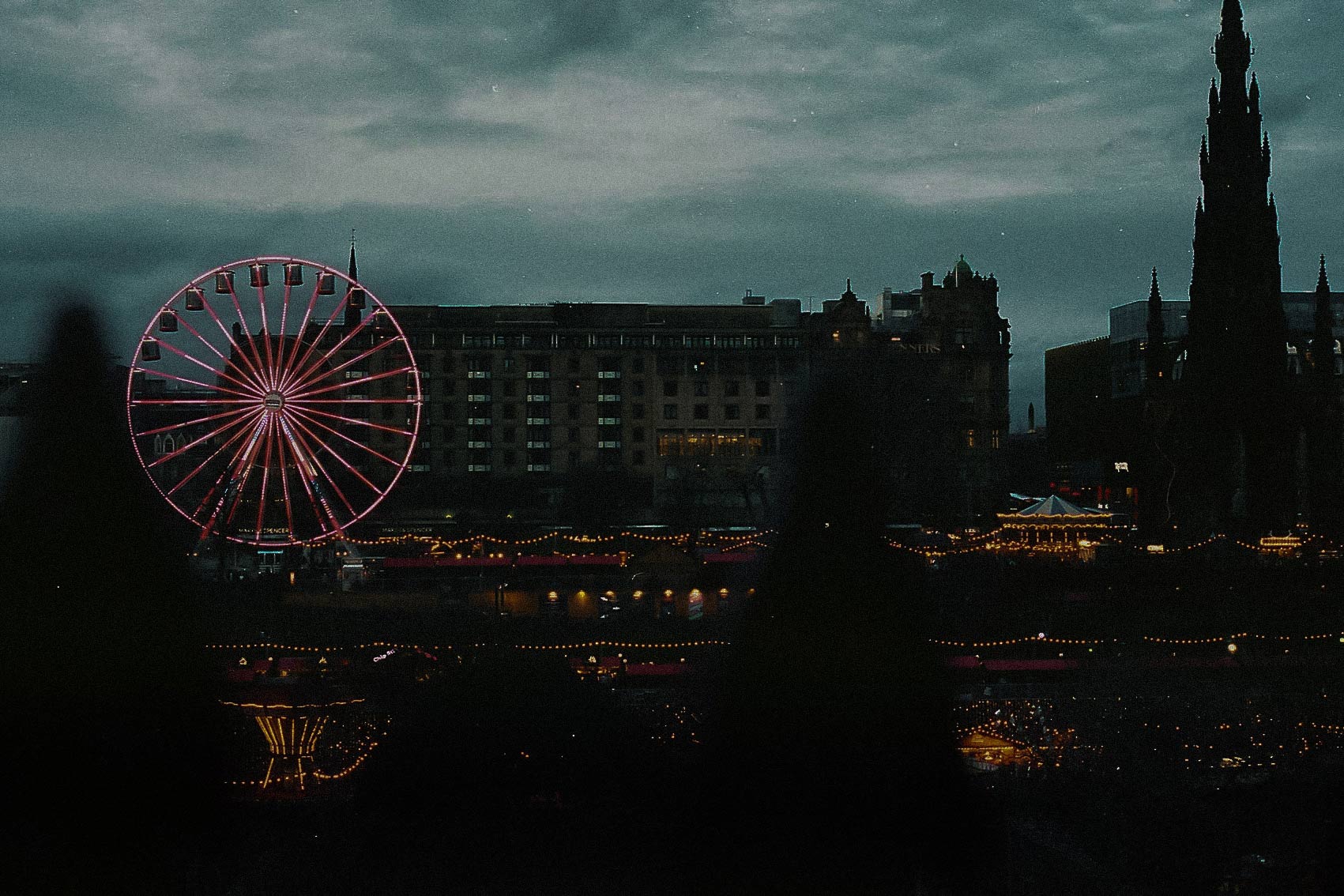 There is no shortage of low light for Glasgow resident, Molly Fletcher, who tells us how the seed of photography was planted as a "Bebo scene kid", and why selfies have helped her ease the photography itch during lockdown.

What is your back story?

I'm 25 and from Scotland. I grew up here and live here (for now). I lived in France and Spain for a while and I speak French and Spanish. For now I teach English as a second language, but I have a Masters in Translation and Interpreting. I love Scotland, and maintain that Glasgow is the greatest city on earth, but I don't intend on living here forever. I'll probably move again as soon as possible, in an ideal, post-COVID world.

What were your first experiences with photography?

The first time I used a camera was to take selfies and post them in scene kid groups on Bebo. I don't remember ever not having a camera since then. I never really learned anything properly or bothered Googling things so I took a lot of terrible photos over the years. I didn't do it consistently enough to care about improving. Instagram didn't exist then either, and what's the point in taking nice photos if you can't post them on the internet and have strangers validate you?

When I got older and could travel more, I started to photograph these places. When I lived in France/Spain, constantly being surrounded by new things makes you want to take more photos (who knew?). And Instagram was well and truly around by then, so it was easier to access more photography and take inspiration from it. I started getting better, but I was only taking photos on my phone and sometimes with a DSLR, and I still never took the time to actually learn much. I could take a nicely composed photo, but I couldn't tell you anything about properly exposing a photo. It wasn't until I started shooting film that I took more time to understand everything – mistakes on film are expensive, and upsetting when you're excited about a shot and it comes back underexposed beyond salvation. I think taking the time to learn and having to be so much more careful with my shots (as opposed to taking 50 of the same thing and choosing the best one later) made me appreciate and love photography so much more.

What draws you to shooting in low light?

I didn't really have a choice but to like low light photography when I moved back to Scotland; we don't get the best lighting conditions here and a lot of days here are just varying shades of grey. That can be a bit discouraging if you aren't into bleak-and-not-even-in-a-moody-way photos, and really limiting if you wait for better conditions. I used to resent living here; it constantly felt like I could be taking way better photos if I still lived in Valencia. But you need to work with what you've got, so I learned to adapt and appreciate it more. In low light everything is different, and I've grown to love it as much as, or more than, other styles that I considered "better" before. I always appreciated it in other people's work, it just took more time for me to appreciate it in my own.

What subjects do you like to shoot and why?

I used to love just taking photos of friends, which made me originally think that my favourite thing to do was portraits. That was wrong and I honestly don't care much for portraits anymore. I do like having body parts (my own or other people's) in photos though. I also drink a lot of coffee, hence the excess of photos of coffee and inside/outside coffee shops on my Instagram. Also in excess on my Instagram are photos with mirrors. I really love a good mirror. I like lights, shadows... I like a lot of things to be honest. I don't limit myself to specific things. One thing I'd like to shoot more of is strangers – it'd be great if I could be braver this year and do that without having to pretend that I'm actually taking a photo of a friend.

There are sometimes specific things that I know I want to get a photo of before I go somewhere, but I never plan or do full shoots. More often I just see something while I'm out that makes me want to take a photo, and I never leave the house without my camera so when that happens I just shoot impulsively.

Camera Body
Canon AE-1
Camera Lens
Canon 50mm f/1.8 FD
Accessories
Kodak UltraMax 400
Please note that some of these are Amazon affiliate links that help to support the running of this site.

How do you achieve the aesthetic in your photos?

Controversial question. The answer is: post-processing. Even though you can get a good photo without editing, I think you can do so much more with it. Like I said before, in the past I spent a lot of time using my phone to take photos quickly, and I don't think it's easy to get an exceptional photo on an iPhone, so I subsequently spent a lot of time editing them to make them actually look good. When I started shooting with film, I didn't just stop editing. It's just a natural part of the process for me, and honestly I find it really therapeutic. There seems to be a lot of people who look down on that – like it loses its "authenticity", especially with film photography. Sure, film can and does look amazing without editing, but I disagree with the idea that that means it absolutely shouldn't be edited. I don't think it's sacred ground – sorry.

A photo without how you felt/your vision behind it is just a photo to me – if editing helps you recreate that feeling or that vision, what could be more authentic than that? If you consider photography as a way to tell a story, or convey a mood, or provoke emotions, or anything like that, why limit yourself to what you got straight from the camera? If the result doesn't make you feel like you did when you took it, why not change it in a way that does? Do people look down on movies where, for instance, specific colours have clearly been emphasised to give it a certain feel? Is it any different to someone choosing to paint in unrealistic colours? Try to tell me that you've ever seen an amazing visual and thought "yeah that's great, but actually it's also terrible because that isn't how real life looks". Why is photography any different?

When I edit I mostly use Lightroom, and how much I edit varies from photo to photo. Sometimes a photo doesn't need much editing at all, maybe just correcting exposure or cropping. Other times I play around more with the colours, and the final result looks really different to what it did to begin with – but never in a way that makes me feel detached from the photo. It always reflects what the moment made me feel at the time.

My first piece of advice would be to take a camera everywhere, and don't try to force yourself into a style you like if it doesn't actually feel "you". There are a lot of styles I can look at and appreciate, and sometimes I wish I did them too, but if I don't feel a connection to it, or it feels forced, then I think it shows in the photo. Try a lot of things and find what you like, but don't force it. It took me a long time to realise that. That said, when you do find a specific style that you like, don't limit yourself to it if something else inspires you. I think your style will evolve depending on where you're at, physically and mentally/emotionally. And, obviously, practise as much as you can.

How has Covid-19 affected your photography?

Well, it's made me take a lot more selfies for starters. I don't think I find a lot of inspiration at home currently (unless the light coming through the window is nice, which is rare). So I'm trying to unlearn the idea that self-portraiture is less valid than other kinds of photography, because I've been made to feel that way in the past.

Overall I think it has affected how inspired I feel, because at times it has limited my options, but it's also been cool to document it in a way. Everyone is capturing moments of one of the most significant periods in our history, all the time. Everyone is sharing their different experiences or perceptions of it. People will talk about this year in decades (and centuries if we don't destroy earth before then) to come, and every photo shows the different little experiences within this big thing. It's kind of amazing. That's a source of inspiration in itself, I suppose.

What are your thoughts on Instagram as a photography platform?

I think Instagram, and especially the algorithm, can be terrible and I will make no secret of that. Instagram users scream "chronological feed" and Instagram replies "more ads????". I think the algorithm has killed a lot of reach, especially through hashtags, and that can be really discouraging for people because we have the idea ingrained that likes = quality, which absolutely isn't true. That said, maybe it should make people care more about what they want to do as opposed to what's going to get the most likes – it doesn't matter either way, because the algorithm (which nobody even understands) will decide anyway.

The frustration is worth it ultimately because the community that comes with it is amazing. I've made a lot of meaningful connections through the film community on Instagram and I am way more grateful for that than I am concerned about how Instagram is on a constant downwards spiral.

Thank you for speaking to us Molly. Any final comments?

Thank you so much for the invitation and opportunity to speak with you; it's always very pleasantly surprising to be "recognised" and appreciated, but especially to this extent. It was also a good way to reflect on my creative process and what it means to me, which is something I should take the time to do more often in future. Thank you!