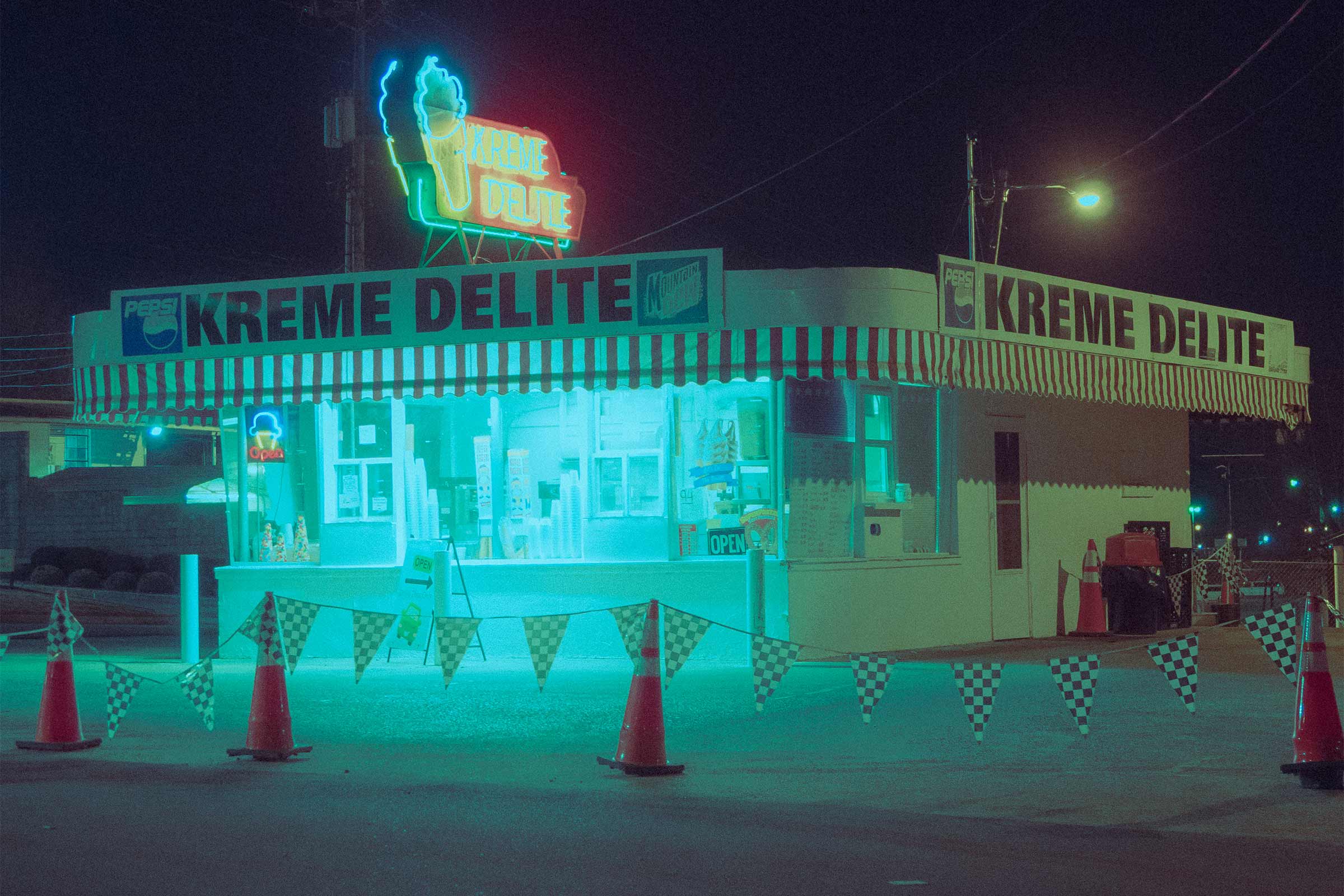 Medical scientist (and part-time nightwalker) Josiah Stewart, is our next guest with a portfolio showcasing American suburbia at night. His photos have a nostalgic, film-like feel to them; choosing subjects that have a retro vibe, and then later edited with colour-grading borrowed from the Cinestill tungsten stock.

Growing up I was always into any kind of art, whether it be drawing, music, films, or photography. I was a quiet kid growing up, always imagining things and drawing what came to mind. During high school I tried to get a DSLR since a few of my friends had them but my mom always said they were too expensive. So I tried to get into music but that was short lived. Finally during my last year of college I bought a Sony A6000 and fell in love with photography again. I'm currently a Medical Scientist at a large hospital in my area working full time.

My Grandfather used to do film photography back in the day and would always give me and my siblings a camera or a camcorder to mess around with. I always wanted a DSLR in highschool but never had the money to get one. In 2018 I got an Iphone 7 Plus and dabbled a bit in mobile photography and a year later finally saved up enough to get a Sony A6000 and that opened my world to different types of lenses that could be used.

I would say my style is street photography mixed with architectural photography, mostly focused on low light and night time shots

I like to shoot buildings and structures mostly due to how there's almost an unlimited amount of them and the majority don't look the same. As for shooting in low light, to me it is more of an emotional process. The darkness brings out the light and with a decent camera set up and good editing you can bring out things that you didn't think were there.

A lot of my inspiration comes from movies. Directors like: Wong Kar-wai, Wes Anderson, Charlie Kaufman and Cinematographers like: Roger Deakins, Chung-hoon Chung, and Bradford Young really shaped my creative vision. I've always been a huge fan of films and with the help of streaming services many films are more accessible.

What are you looking for when you go out shooting?

I look for decently lit areas that are more lit by the building or structure itself instead of the lights around it. Colorful lights catch my eyes the fastest. A good neon sign never disappoints.

I usually don't plan to go out shooting - I'm more impulsive. I just get up and go if I'm in the mood.

How do you know when you've got "the shot"?

I make a mental list in my head for that scenario, good exposure, low noise, and a good angle. When those three are checked off I'll usually flag them to be edited later.

Since my photos are mostly taken at night I usually make sure to use a lens that has a wide aperture of at least f/2.8. Depending on where I am I will usually set up a tripod or if I want something quick I would just use my digital camera and take it from inside my car. After that I just upload them from my SD card to lightroom and start editing. My editing workflow is pretty consistent. I usually lower the exposure a little bit and lower the contrast a lot and then I go straight into color grading (which to me is the best part) I usually just push the midtones, shadows, and highlights to crazy areas until I get a look I like.

Before and after editing

It has changed a lot. I started just taking portraits of my little brother, my cat, and some friends. Then it evolved into me taking pictures of buildings and after being inspired by some photographers like Matt Dunlap (who is an amazing photographer by the way) I started trying out night photography. I still feel like I have a lot of work to do but the journey has been amazing so far.

Do you have any photos that you are particularly proud of?

There's a picture I took of this really small Mexican restaurant in my hometown. I'm proud of it because it was the first picture that I actually planned out and knew exactly what I wanted out of it. There's a scene in the movie "I'm Thinking About Ending Things" where the main characters go to a little ice cream shop called "Tulsey Town" and when seeing it I thought that it looked really similar to the little mexican place that was near my house.

Another picture that I'm proud of is one that I took pretty recently. It's just a simple picture of a shell gas station at night but I'm proud of it because I finally got that look that I was chasing from the start.

Before and after editing

What does photography mean to you?

I feel like photography has become an instinct to me now. As in, if I see a scene I feel like I have to take a picture to capture the beauty of it not for likes or to be seen but because I want to savour it.

Photography to me is an outlet. I get to go out and spend time by myself while also being able to enjoy beautiful scenes and to later go back and edit them to make them better than they were before.

Just do it. Don't ask anyone if you should. There are plenty of cheap mirrorless cameras out there that are affordable and even phones have great cameras these days. Go out and take some pictures and don't give up if things don't look the way you want them too. It's all trial and error.

How has COVID-19 affected your photography?

COVID-19 hasn't really affected my photography. I work in the medical field, so work didn't change, and being a night photographer, things never changed.

What are your thoughts on Instagram as a photography platform?

I've been on Instagram since it first got out of its beta. I mainly used it as just a social media platform until very recently so I'll only go off of what I've seen so far. I feel like the app has strayed away from photography and is focusing more on influencers (reels in particular) and from the way it looks it seems like that isn't gonna change. I've seen many other photographers go to places like Twitter and it looks like things are just starting over there. The algorithm can be hit or miss at times and honestly it can be really discouraging but I would just encourage everyone to just keep going, and do it because you love it.

I play the guitar and piano. I really love music. It's something that I cannot live without. I don't think that it directly feeds into photography but I feel like all creative processes can complement each other in some way or another.

Thank you for taking the time to speak to us Josiah. Any final words?

Thank you for giving me the opportunity to talk about my work! It was fun! To anyone out there that wants to get into photography just know that there are so many resources out there to help you, YouTube is a huge one, and don't be afraid to be upset with the photos you take, it's a process like any other hobby and in the end it'll all be worth it!